Kinetic Analysis of Zinc Accumulation in the Gills of Juvenile Rainbow Trout: Effects of Zinc Acclimation and Implications for Biotic Ligand Modeling

Juvenile rainbow trout were acclimated to hard water (Ca2+ = 1.0 mM, Mg2+ = 0.2 mM; hardness = 120 mg CaCO3/L) and hard water plus 250 Ág/L Zn (3.8 ÁM). After 30 d of exposure, there was no difference in the total Zn levels of the gills of Zn-exposed and control fish (~70 Ág Zn/g gill). Exposure of both groups to a range of Zn concentrations (0-2,900 Ág/L Zn) for up to 7 d also had no effect on the measured total Zn levels in the gills. However, using radiolabeled 65Zn, measurement of new Zn appearance in the gills was possible. Trout were exposed to a range of Zn concentrations (with 65Zn) and the gills were sampled at times ranging from 0.5 to 72 h. The fast turnover pool of Zn in the gills increased with increasing acute Zn exposure concentration, while the maximum size of the fast pool was about ninefold larger in Zn-acclimated fish (4.14 Ág Zn/g gill) versus control fish (0.45 Ág Zn/g gill). At all sampling times, gill 65Zn accumulation exhibited saturation kinetics, allowing calculation of binding capacity (Bmax) and affinity (Kd). In both control and Zn-acclimated trout, Kd decreased rapidly (affinity increased) from 0.5 to 3 h and then remained constant up to 72 h. Bmax increased rapidly from 0.5 to 3 h in both groups, then the rate of increase began to subside but was still increasing from 24 to 72 h. At all times, the Kd of Zn-acclimated fish was higher (i.e., lower affinity) and Bmax was greater than controls. The stabilized Kds (>3 h) were approximately 280 Ág/L total Zn (log K = 5.6 as Zn2+) and 575 Ág/L total Zn (log K = 5.3 as Zn2+) in control and Zn-acclimated fish, respectively. The Bmax of control fish at 0.5 h was 0.37 Ág Zn/g gill and increased to 8.63 Ág Zn/g gill by 72 h. The Bmax of Zn-acclimated fish increased from 0.70 to 11.61 ?g Zn/g gill over the same time period. Preexposure to 250 Ág/L Zn appeared to have little effect on acute zinc toxicity, though the 96-h LC50s for both groups were relatively high (~3,000 Ág/L Zn) in comparison to previous measurements. The relationship between gill binding constants for different metals and relative toxicity is critically assessed with respect to biotic ligand modeling. 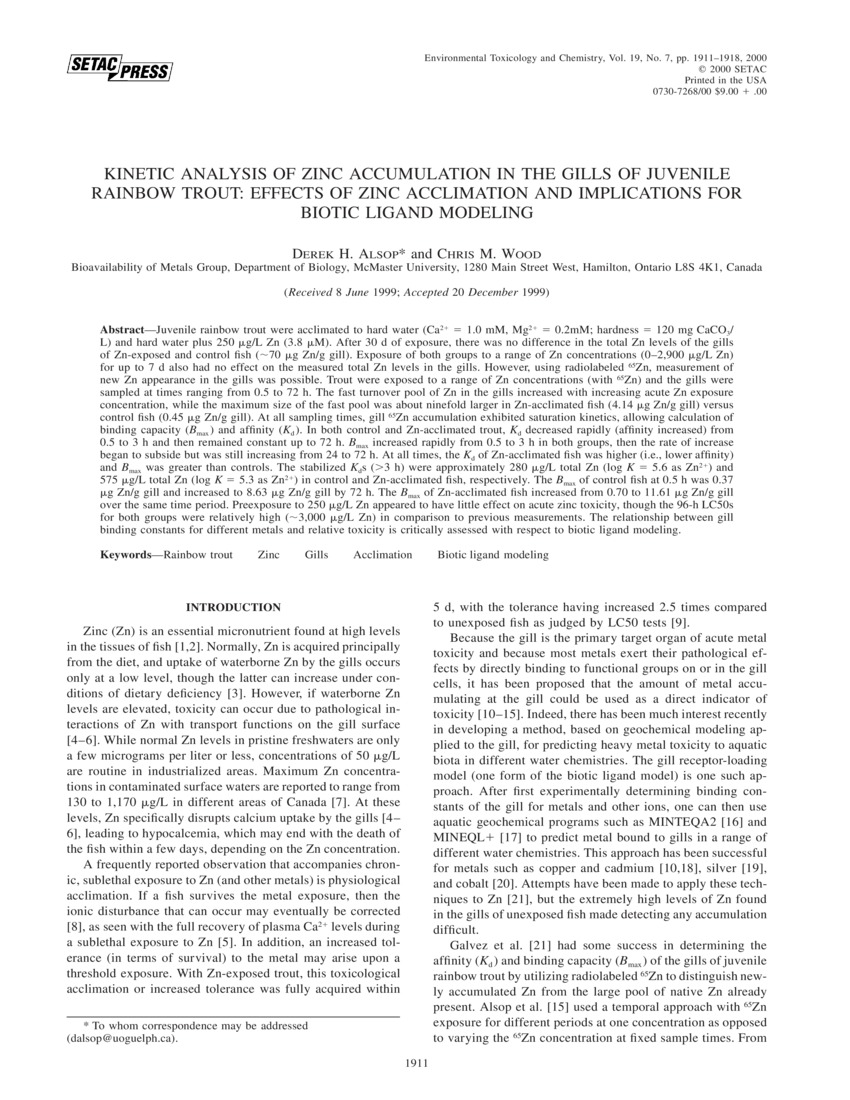