Toxic Pfiesteria-like dinoflagellates have been implicated as causative agents of major fish kills (affecting 103-109 fish) in estuaries and coastal waters of the mid-Atlantic and southeastern U.S. Transformations among an array of flagellated, amoeboid, and encysted stages in the complex life cycle of the representative species, Pfiesteria piscicida, are controlled by the availability of fresh secretions, blood, or other tissues of fish prey. P. piscicida also is a voracious predator on other estuarine microorganisms. Pfiesteria-like dinoflagellates require an unidentified substance(s) commonly found in fresh fish excreta-secreta to initiate toxin production. P. piscicida is lethal to fish at low cell densities (>250-300 cells ml-l), and at sublethal levels (~100-250 cells ml-1) it has been shown to cause ulcerative fish diseases. P. piscicida also has been linked to serious human health impacts. This dinoflagellate is curythermal and euryhaline, with optima for toxic activity by the most lethal stage (toxic zoospores, TZs) at ?26°C and 15 psu, respectively. Thus far it has shown no light optimum and is capable of killing fish at any time during a 24-h cycle. In warmer waters ?15°C) flagellated stages predominate while fish are dying, whereas amoebae predominate in colder conditions and when fish are dead. Nutritional stimuli influencing P. piscicida are complex; inorganic phosphate apparently can directly stimulate TZs, whereas inorganic phosphate and nitratc indirectly promote increased production of nontoxic zoospores (NTZs, maintained in the absence of live fish, as potential precursors to lethal TZs) by stimulating their algal prey. Organic phosphate (P,) and nitrogen are taken up by P. piscicida osmotrophically, and P,, is stimulatory to both TZs and NTZs. The available data point to a critical need to characterize the chronic and acute impacts of toxic Pfiesteriu-like dinoflagellates on fish and other targeted prey in estuarine and coastal waters that are adversely affected by cultural eutrophication.

Publisher - Association for the Sciences of Limnology and Oceanography (ASLO) 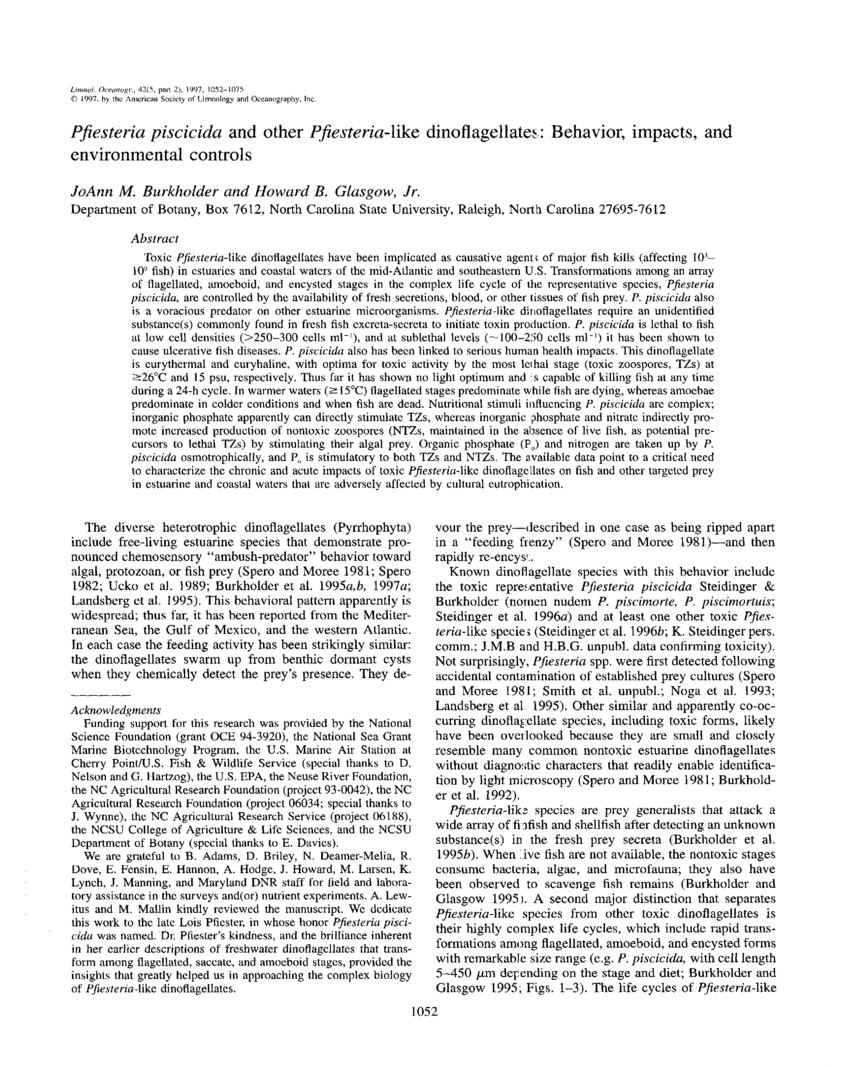