Seasonal Movements, Migratory Behavior, and Site Fidelity of West Indian Manatees Along the Atlantic Coast of the United States as Determined by Radio-telemetry

The study area encompassed the eastern coasts of Florida, Georgia, and South Carolina, including inland waterways such as the St. Johns River (Fig. 1). Manatees inhabited the relatively narrow band of water that lies between the barrier beaches and the mainland, occasionally venturing into the ocean close to shore. Between Miami and Fernandina Beach, Florida, 19 inlets provided manatees with corridors between the intracoastal waters and the Atlantic Ocean; the distance between adjacent inlets averaged 32 km (SD = 24 km) and varied from 3 to 88 km. Habitats used by manatees along this 900-km stretch of coastline varied widely and included estuaries, lagoons, rivers and creeks, shallow bays and sounds, and ocean inlets. Salinities in most areas were brackish, but ranged from completely fresh to completely marine. The predominant communities of aquatic vegetation also varied geographically and with salinity: seagrass meadows and mangrove swamps in brackish and marine waters along the southern half of peninsular Florida; salt marshes in northeastern Florida and Georgia; benthic macroalgae in estuarine and marine habitats; and a variety of submerged, floating, and emergent vegetation in freshwater rivers, canals, and streams throughout the region. Radio-telemetry has been used successfully to track manatees in other regions of Florida (Bengtson 1981, Powell and Rathbun 1984, Lefebvre and Frohlich 1986, Rathbun et al. 1990) and Georgia (Zoodsma 1991), but these early studies relied primarily on conventional VHF (very high frequency) transmitters and were limited in their spatial and temporal scope (see O'Shea and Kochman 1990 for overview). Typically, manatees were tagged at a thermal refuge in the winter and then tracked until the tag detached, usually sometime between the spring and fall of the same year. Our study differs from previous research on manatee movements in several important respects. First, we relied heavily on data from satellite-monitored transmitters using the Argos system, which yielded a substantially greater number of locations and more systematic collection of data compared to previous VHF tracking studies (Deutsch et al. 1998). Second, our tagging and tracking efforts encompassed the entire range of manatees along the Atlantic coast, from the Florida Keys to South Carolina, so inferences were not limited to a small geographic area. Third, we often used freshwater to lure manatees to capture sites, which allowed tagging in all months of the year; this provided more information about summer movement patterns than had previous studies which emphasized capture and tracking at winter aggregations. Finally, the study spanned a decade, and success in retagging animals and in replacing transmitters allowed long-term tracking of many individuals. This provided the opportunity to investigate variation in seasonal movements, migratory behavior, and site fidelity across years for individual manatees. 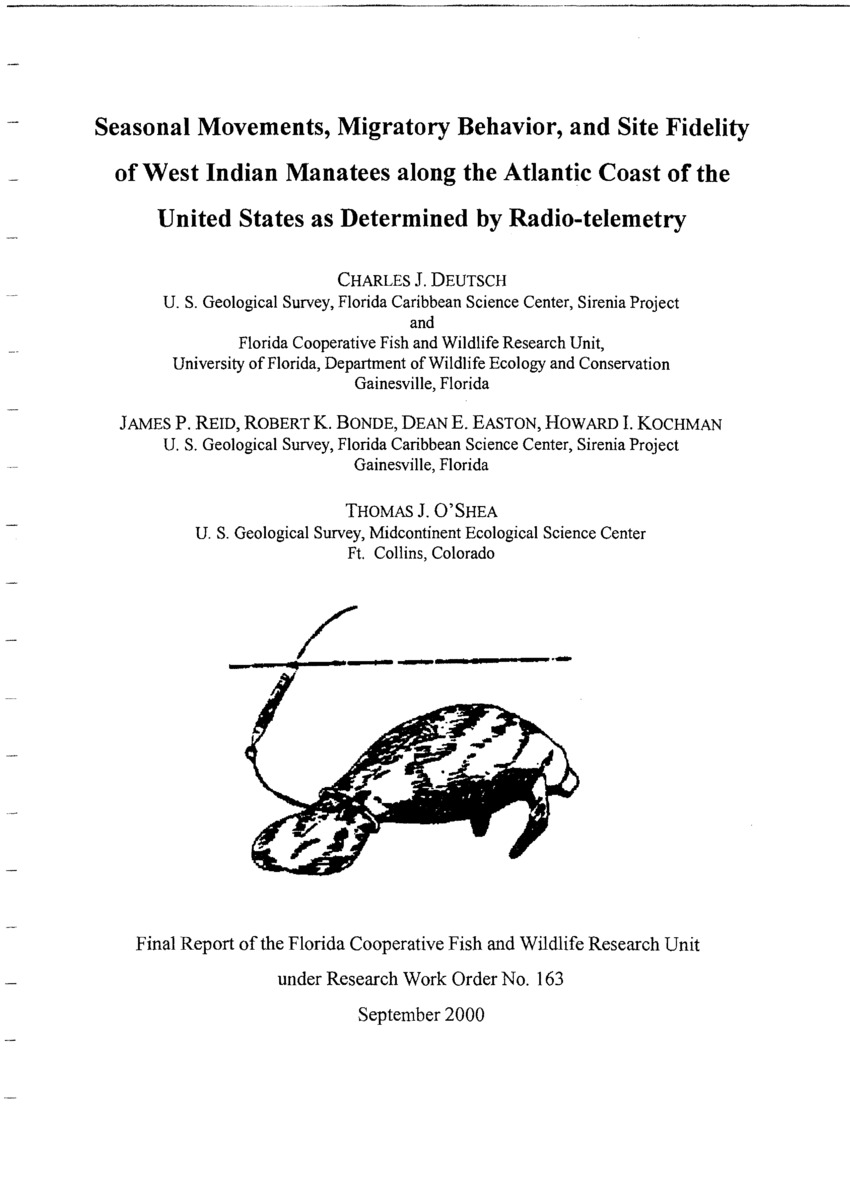