Seasonal Movements, Migratory Behavior, and Site Fidelity of West Indian Manatees Along the Atlantic Coast of the United States

The West Indian manatee (Trichechus manatus) is endangered by human activities throughout its range, including the U.S. Atlantic coast where habitat degradation from coastal development and manatee deaths from watercraft collisions have been particularly severe. We radio-tagged and tracked 78 manatees along the east coast of Florida and Georgia over a 12-year period (1986-1998). Our goals were to characterize the seasonal movements, migratory behavior, and site fidelity of manatees in this region in order to provide information for the development of effective conservation strategies. Most study animals were tracked remotely with the Argos satellite system, which yielded a mean (SD) of 3.7 (1.6) locations per day; all were regularly tracked in the field using conventional radiotelemetry methods. The combined data collection effort yielded >93,000 locations over nearly 32,000 tag-days. The median duration of tracking was 8.3 months per individual, but numerous manatees were tracked over multiple years (max = 6.8 years). Most manatees migrated seasonally over large distances between a northerly warm-season range and a southerly winter range (median one-way distance = 280 km, max = 830 km), but 12% of individuals were resident in a relatively small area (<50 km) year-round. The movements of one adult male spanned >2,300 km of coastline between southeastern Florida and Rhode Island. No study animals journeyed to the Gulf coast of Florida. Regions heavily utilized by tagged manatees included: Fernandina Beach, FL to Brunswick, GA in the warm season; northern Biscayne Bay to Port Everglades, FL in the winter; and central coastal Florida, especially the Banana River and northern Indian River lagoons, in all seasons. Daily travel rate, defined as the distance between successive mean daily locations, averaged 2.5 km (SD = 1.7), but this varied with season, migratory pattern, and sex. Adult males traveled a significantly greater distance per day than did adult females for most of the warm season, which corresponded closely with the principal period of breeding activity, but there was no difference between the sexes in daily travel rate during the winter. The timing of seasonal migrations differed markedly between geographic regions. Most long-distance movements in the southern half of the study area occurred between November and March in response to changing temperatures, whereas most migrations in the northern region took place during the warmer, non-winter months. Manatees left their warm-season range in central Florida in response to cold fronts that dropped water temperatures by an average of 2.0°C over the 24-hr period preceding departure. Water temperature at departure from the warm-season range averaged 19°C, but varied among individuals (16-22°C) and was not related to body size or female reproductive status. The presence of industrial warm-water effluents permitted many manatees to overwinter north of their historic winter range, and for some migrants this delayed autumn migrations and facilitated earlier spring migrations. Southward autumn and northward spring migrations lasted an average of 10 and 15 days at mean rates of 33.5 (SD = 7.6) and 27.3 (SD = 10.5) km/day, respectively. The highest rate of travel during migration was 87 km/day (3.6 km/hr) during winter. Manatees overwintering in southeastern Florida often traveled north during mild weather-sometimes reaching their warm-season range-only to return south again with the next major cold front. Manatees were consistent in their seasonal movement patterns across years and showed strong fidelity to warmseason and winter ranges. Within a season, individuals usually occupied only 1 or 2 core use areas that encompassed about 90% of daily locations. Most manatees returned faithfully to the same seasonal ranges year after year (median distance between range centers was <5 km between years). Seasonal movements of 4 immature manatees tracked as calves with their mothers and then as independent subadults after weaning provided evidence for strong natal philopatry to specific warm-season and winter ranges, as well as to migratory patterns. Seasonal movement patterns of manatees along the Atlantic coast were largely driven by seasonal changes in temperature, but seasonal and spatial variation in the abundance and quality of forage was probably also important. Individuals generally occupied a few, relatively small seasonal ranges that were linked by lengthy travel corridors used briefly during migrations. The existence of traditional migrations and of strong philopatry to specific areas have a number of implications for management, including the design of protected area networks for manatees. Despite these conservative behavioral traits, individual manatees showed variability in other movement parameters, including the timing of migrations and duration spent in different regions within a winter. This behavioral flexibility has permitted Florida manatees to exploit some human habitat alterations to their advantage; for example, by using industrial thermal outfalls to extend their stay in northerly regions. Recovery of this endangered species will depend on our ability to reduce human-caused mortality, to protect essential habitats, and to keep the pace of habitat alteration within the time frame of the manatee's capacity to adapt. 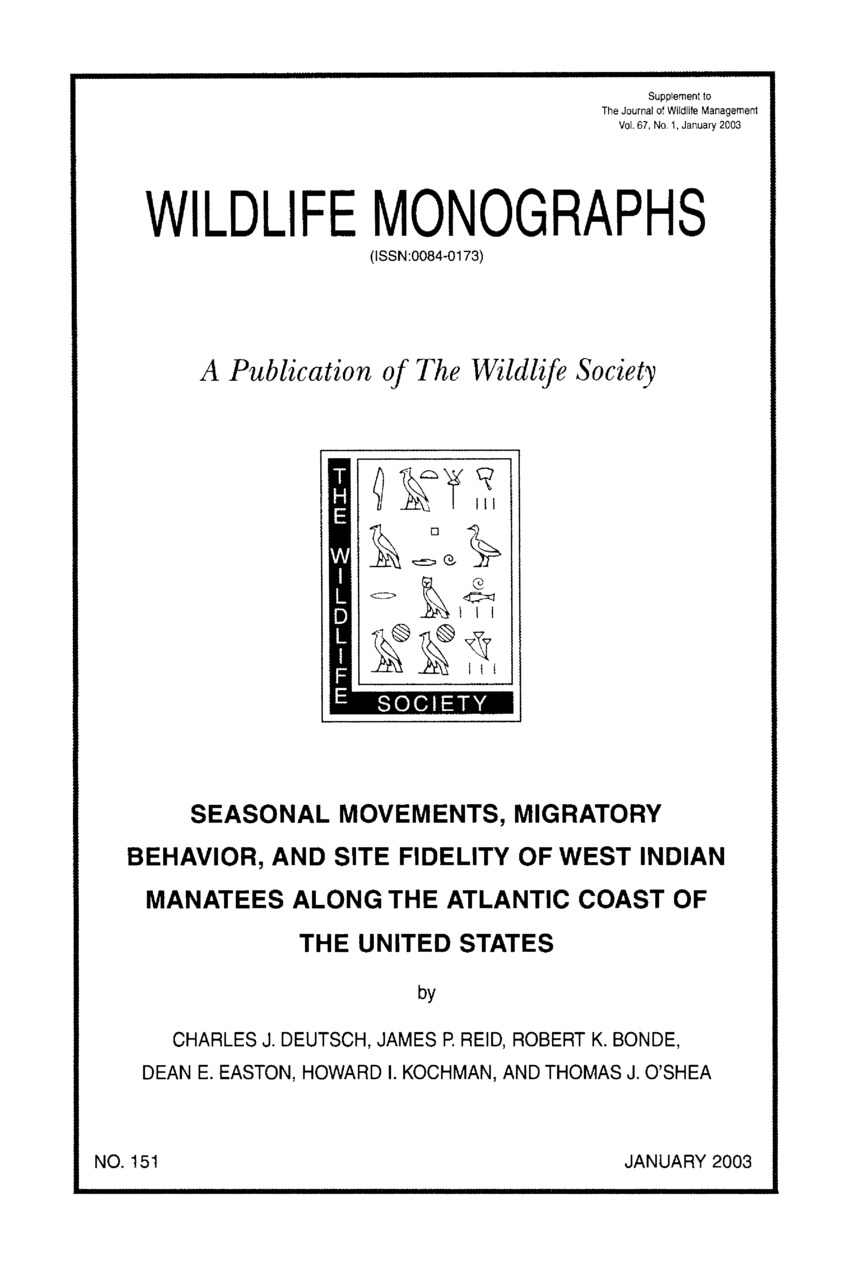