Persistent Organic Pollutants (POPs) in a Small, Herbivorous, Arctic Marine Zooplankton (Calanus hyperboreus): Trends from April to July and the Influence of Lipids and Trophic Transfer

Samples of Calanus hyperboreus, a herbivorous copepod, were collected (n=20) between April and July 1998, and water samples (n=6) were collected in May 1998, in the Northwater Polynya (NOW) to examine persistent organic pollutants (POPs) in a high Arctic marine zooplankton. Lipid content (dry weight) doubled, water content (r2=0.88) and ?15N (r2=0.54) significantly decreased, and ?13C significantly increased (r2=0.30) in the C. hyperboreus over the collection period allowing an examination of the role of these variables in POP dynamics in this small pelagic zooplankton. The rank and concentrations of POP groups in C. hyperboreus over the entire sampling was ?PCB (30.1±4.03 ng/g, dry weight) > ?HCH (11.8±3.23) > ?DDT (4.74±0.74), ?CHLOR (4.44±1.0) > ?ClBz (2.42±0.18), although these rankings varied considerably over the summer. The ?- and ?-HCH and lower chlorinated PCB congeners were the most common POPs in C. hyperboreus. The relationship between bioconcentration factor (BCF) and octanol–water partition coefficient (Kow) observed for the C. hyperboreus was linear and near 1:1 (slope = 0.72) for POPs with a logKow between 3 and 6 but curvilinear when hydrophobic POPs (logKow>6) were included. Concentrations of and ?ClBz increased over the sampling period, but no change in ?PCB or ?DDT was observed. After removing the effects of time, the variables lipid content, water content, ?15N and ?13C did not describe POP concentrations in C. hyperboreus. These results suggest that hydrophobic POP (logKow=3.8–6.0) concentrations in zooplankton are likely to reflect water concentrations and that POPs do not biomagnify in C. hyperboreus or likely in other small, herbivorous zooplankton. 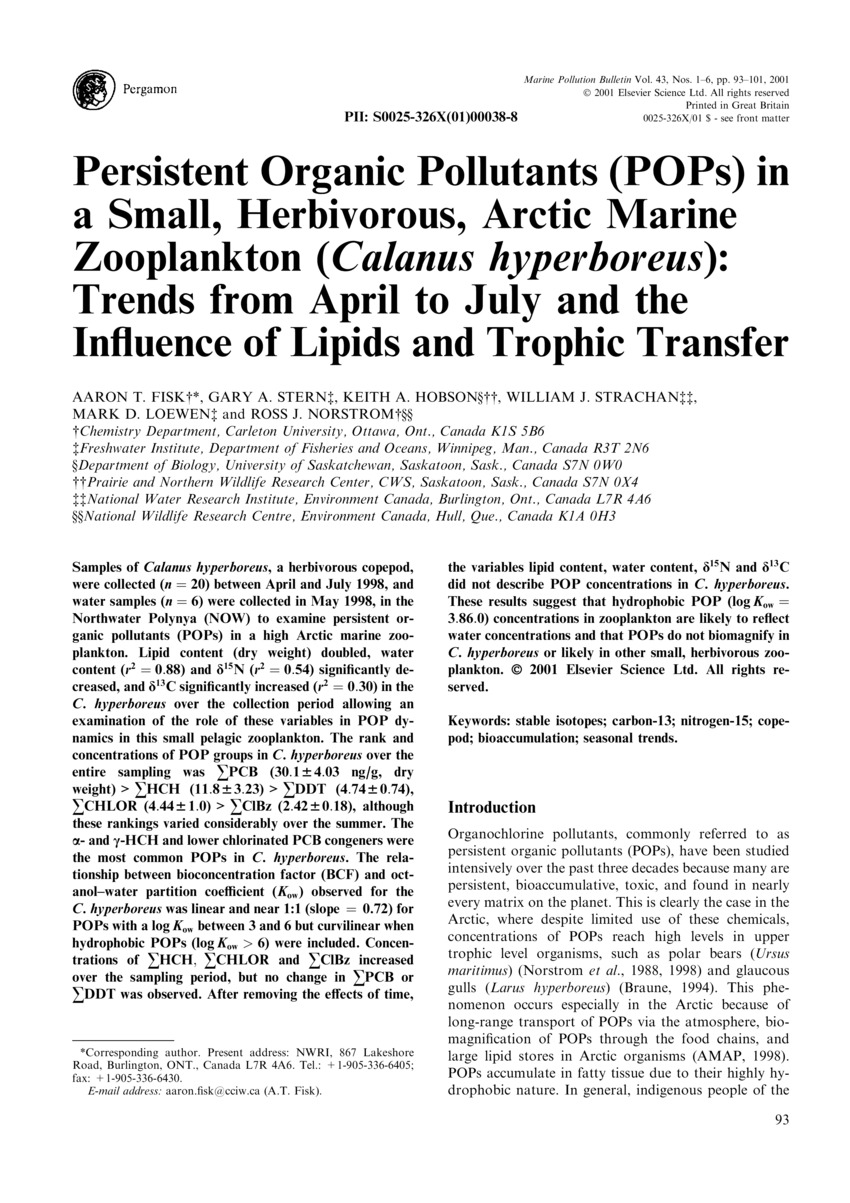