Recent studies have reported a number of abnormalities in the hatchling and juvenile alligators of Lake Apopka, FL (USA). These abnormalities include modifications of plasma concentrations of sex steroids in males and females as well as abnormalities in gonadal morphology, gonadal enzyme activity, and steroidogenesis. Embryonic exposure to environmental contaminants in the eggs has been hypothesized to be the causal agent for these changes. However, posthatchling exposure can also contribute to changes in reproductive and endocrine functioning. We have detected serum concentrations of 16 of 18 organochlorine pesticides or metabolites (OCs) and 23 of 28 congener-specific polychlorinated biphenyls (PCBs) examined in juvenile alligators from Lake Apopka, Orange Lake, and Lake Woodruff National Wildlife Refuge. Lake Apopka juveniles had significantly elevated serum concentrations of p,p?-DDE, dieldrin, endrin, mirex, oxychlordane, ?DDTs, and ?PCBs compared to juveniles from the other lakes. Further, we observed no correlations between serum contaminant concentrations and sex steroid concentrations (estradiol-17? and testosterone). However, serum testosterone was significantly lower in males from Lake Apopka and Orange Lake compared to Lake Woodruff NWR. We did not observe relationships between phallus size or other body parameters and serum contaminant levels. Phallus size was smaller in males from Lake Apopka even after adjustment for body size. We suggest that the observations previously reported for juvenile alligators—and observed again in this study—are apparently not associated with the current serum levels of the environmental contaminants we measured, but could be due to exposures during embryonic development to these or other pollutants. Future studies must determine if a causal relationship exists between the contaminants found in alligator eggs and abnormalities observed in the hatchlings and persisting in juveniles. 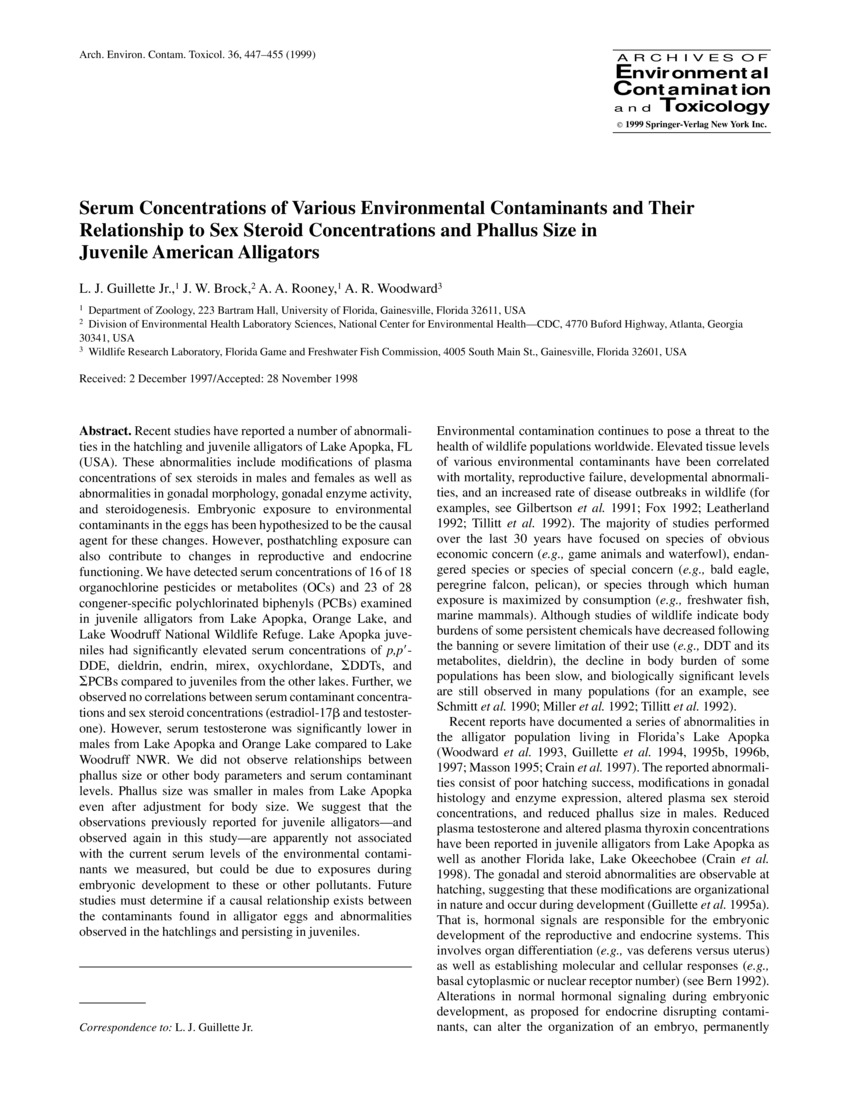