We used radio-tagging (conventional and satellite-based) and photo-identification to study aspects of Florida manatee (Trichechus manatus latirostris) reproduction and mortality along the Atlantic Coast of Florida. Fifty-five manatees were tagged during 1986-91 from Georgia to theBiscayne Bay; most were initially tagged in Brevard County, Florida. Tag loss was common and affected the continuity of observations during studies, but our attachment system allowed frequent tag replacement. The duration of continuous transmitter deployment ranged from 1 to 578 days; 34 manatees were monitored during 217 multiple bouts. Termination of deployments was marked by therecovery of the tag after separation at designed weak links, tag replacement with a new unit by snorkelers, loss of the tethered transmitter, loss of signal, or death of the tagged manatee. Observations of tagged females revealed one gestation period, five births, periods of dependence by young, weaningepisodes, intervals between births, and sizes of reproductive females. Eighteen females produced 22 calves. Birth dates and locations of five calves were determined. Births occurred between the months of May and September in quiet canals or boat basins. Two of the births were preceded by moves bythe females of more than 100 km. Six tagged manatees died. Two deaths were due to anthropogenic causes; the causes of death of the remaining dead manatees were not determined. Reproduction was also studied on the basis of photo-identification records of 185 females collected during 1978 throughwinter 1991-92. The pooled proportion of females accompanied by young in each winter was 0.42. Calf dependencies on mothers ranged from 1 to 2 years. Eleven intervals between successive births were determined from an abbreviated data set. The average duration of the intervals was 2.6 years. Data on reproduction are concordant with information from studies of manatees elsewhere in Florida. 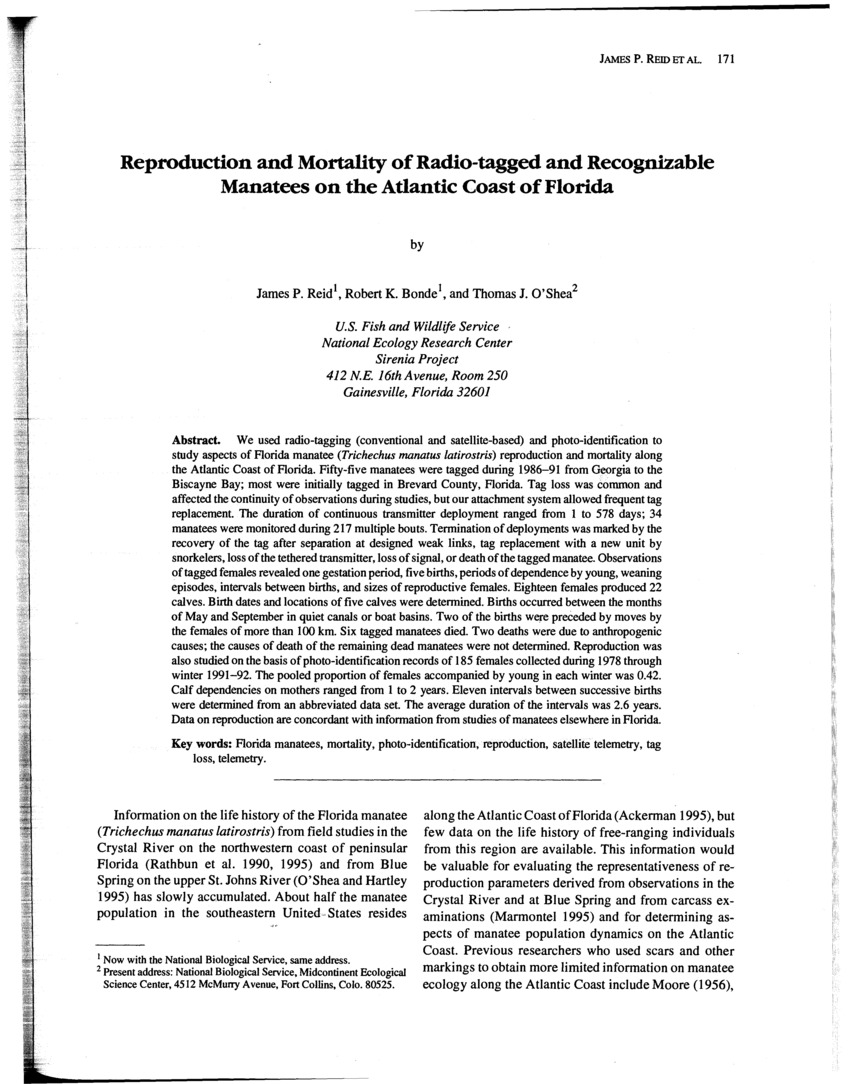