The Growth of Submersed Macrophytes Under Experimental Salinity and Light Conditions

The growth, morphology, and chemical composition ofHydrilla verticillata, Myriophyllum spicatum, Potamogeton perfoliatus, andVallisneria americana were compared among different salinity and light conditions. Plants were grown in microcosms (1.2 m5) under ambient photoperiod adjusted to 50% and 8% of solar radiation. The culture solution in five pairs of tanks was gradually adjusted to salinities of 0, 2, 4, 6, and 12‰. With the exception ofH. verticillata, the aquatic macrophytes examined may be considered eurysaline species that are able to adapt to salinities one-third the strength of sea water. With increasing salinity, the inflorescence production decreased inM. spicatum andP. perfoliatus, yet asexual reproduction in the latter species by underground buds remained constant. Stem elongation increased in response to shading inM. spicatum, while shadedP. perfoliatus had higher concentrations of chlorophylla. In association with high epiphytic mass, chlorophylla concentrations in all species were greatest at 12‰. The concentration of sodium increased in all four species of aquatic macrophytes examined here, indicating that these macrophytes did not possess mechanisms to exclude this ion. The nitrogen content (Y) of the aquatic macrophytes tested increased significantly with higher sodium concentration (X), suggesting that nitrogen may be utilized in osmoregulation (Y = X × 0.288 + 6.10, r2 = 0.71). The tolerance ofV. americana andP. perfoliatus to salinity was greater in our study compared to other investigations. This may be associated with experimental methodology, whereby macrophytes were subjected to more gradual rather than abrupt changes in salinity. The two macrophytes best adapted to estuarine conditions in this study by exhibiting growth up to 12‰, includingM. spicatum andV. americana, also exhibited a greater degree of response in morphology, tissue chemistry (including chlorophyll content and total nitrogen), and reproductive output in response to varying salinity and light conditions. 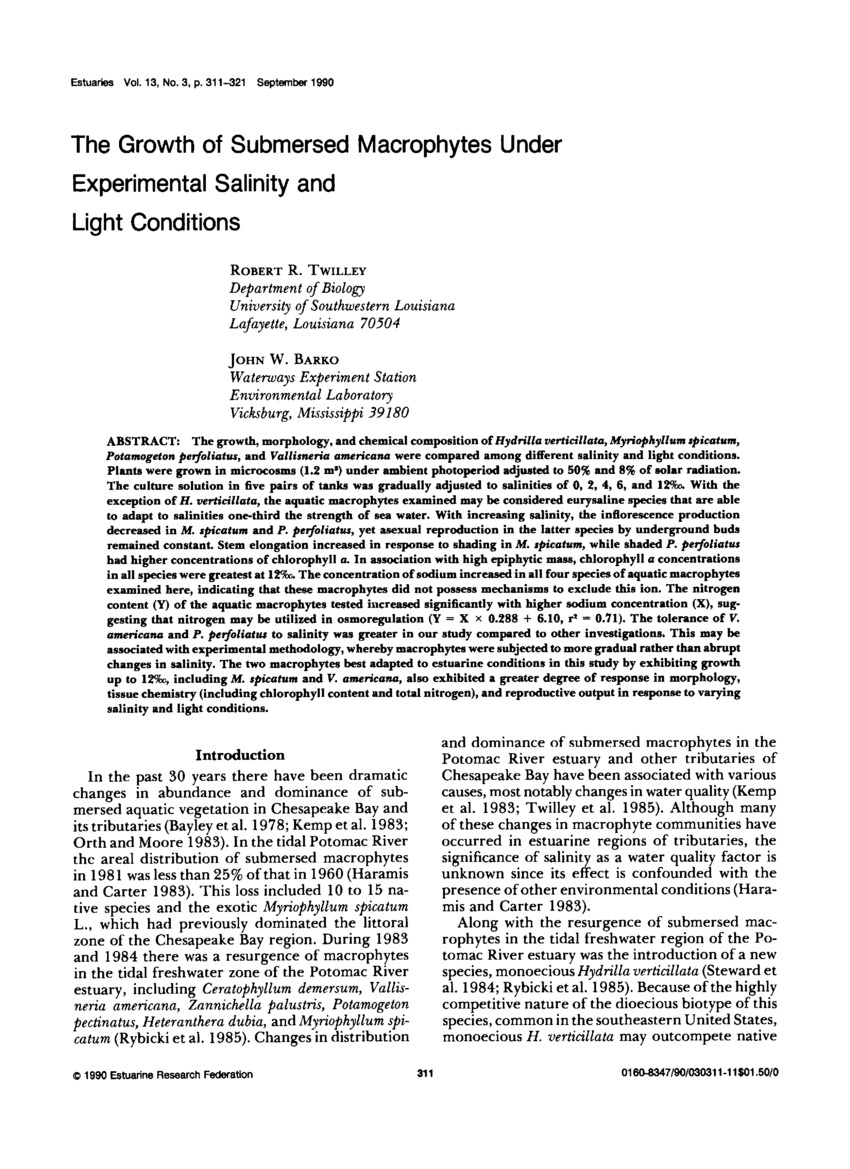