The Effects of Salinity on Acute Toxicity of Zinc to Two Euryhaline Species of Fish, Fundulus heteroclitus and Kryptolebias marmoratus

It is well known that the toxicity of zinc (Zn) varies with water chemistry and that its bioavailability is controlled by ligand interactions and competing ions. Zn toxicity in freshwaters with varying water chemistry has been well characterized; however, far less attention has been paid to the toxicity of Zn in estuarine and marine systems. We performed experiments using two euryhaline species of killifish, Fundulus heteroclitus and Kryptolebias marmoratus, to investigate the effects of changing salinity on acute toxicity of Zn. Larvae (7- to 8-days old) of each species were exposed to various concentrations of Zn for 96?h at salinities ranging from 0 to 36 ppt and survival was monitored. As salinity increased, Zn toxicity decreased in both fish species, and at salinities above 10 ppt, K. marmoratus larvae were generally more sensitive to Zn than were those of F. heteroclitus. The protection of salinity against Zn toxicity in F. heteroclitus was further investigated to determine the role of Ca2+. Increased Ca2+ in freshwater protected against Zn toxicity to the same extent as did saline waters with an equal Ca2+ concentration up to ?200?mg/L Ca for F. heteroclitus and ?400?mg/L Ca for K. marmoratus. These results suggest that these two species may have differing Ca2+ requirements and/or rates of Ca2+ uptake in water of intermediate to full-strength salinity (?200–400?mg/L Ca2+) and thus differ in their sensitivity to Zn. The overall goal of this study was to better understand Zn toxicity in waters of different salinity and to generate data on acute Zn toxicity from multiple species over a range of salinities, ultimately for use in development of estuarine and marine biotic ligand models. 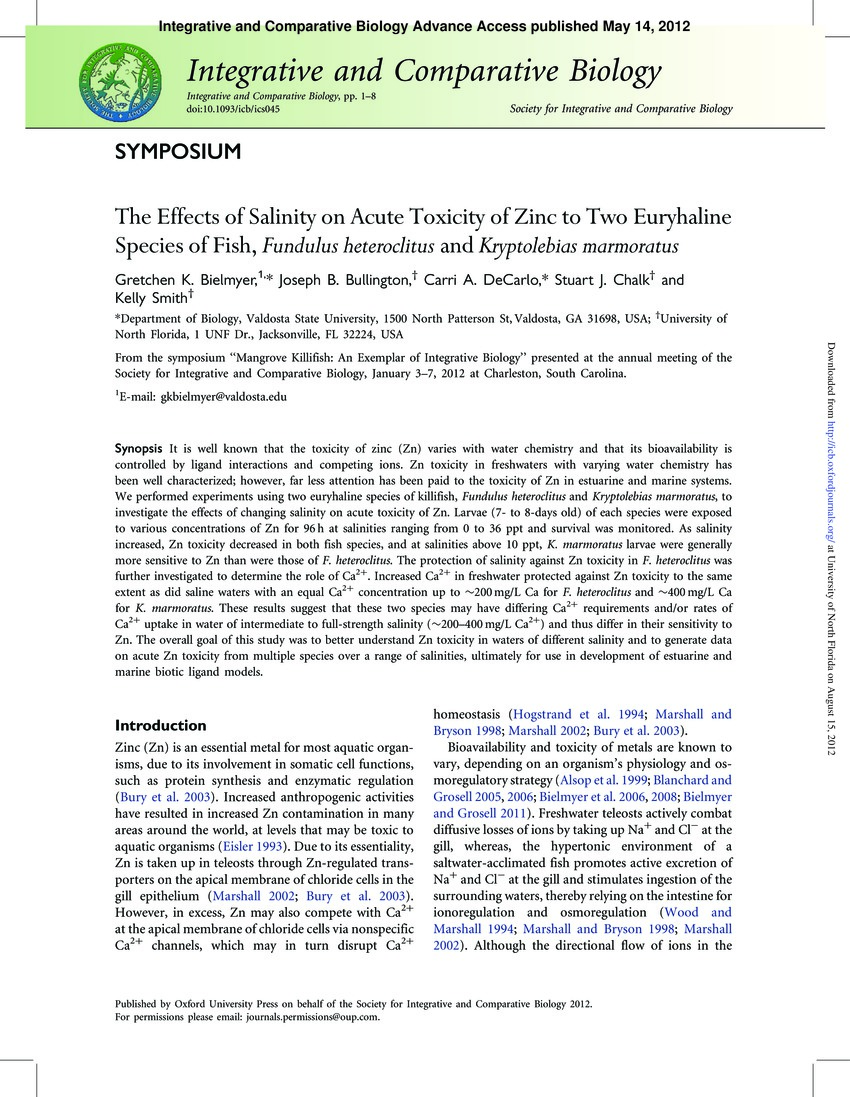