Toxigenic cyanobacteria are common components of Florida's surface waters and may pose a threat to their ecology and a risk to human health. The Lake County Water Authority, the Florida Department of Health, the St. Johns River Water Management District, the South Florida Water Management District, and the Lee County Health Department have all recently monitored local waters for cyanotoxins. In 2004, 6 central Florida lakes were sampled monthly for 12 months at centrally located open water sample sites. Toxin data (n = 72 for all toxin analyses) showed that microcystins (0.1–3.6 ?g/L) were present in all 12 months; multiple bloom events per lake were observed; bloom concentrations ranged from 5–7,500 ?g/L; and blooms occurred throughout the entire year. Cylindrospermopsin, ranging in concentration from 0.05 to 0.2 ?g/L, was reported in 22% of all samples analyzed and occurred predominantly between August and December. Anatoxin-a was not reported in 2003/2004 but was identified in 2002/2003 (30%, 0.05?7.0 ?g/L). Data from the St. Johns River was similar to that of the central Florida lakes. In general, microcystins ranged between 0.1 and 31 ?g/L and were detected in all samples (n = 50), while cylindrospermopsin was observed less frequently (30%, n = 48) and at lower concentrations (0.07?1.6 ?g/L). Anatoxin-a was not reported (n = 48). In contrast, the major Microcystis spp. blooms that occurred in the St. Johns, the St. Lucie, and the Caloosahatchee rivers in 2005 were reported to contain relatively high levels of microcystins (rangemax. conc.= 278–5700 ?g/L) and persisted for approximately 2 months. Data indicate that cyanotoxin production can be a year-round phenomenon in Florida and can occur at levels that may cause ecological and human health problems. 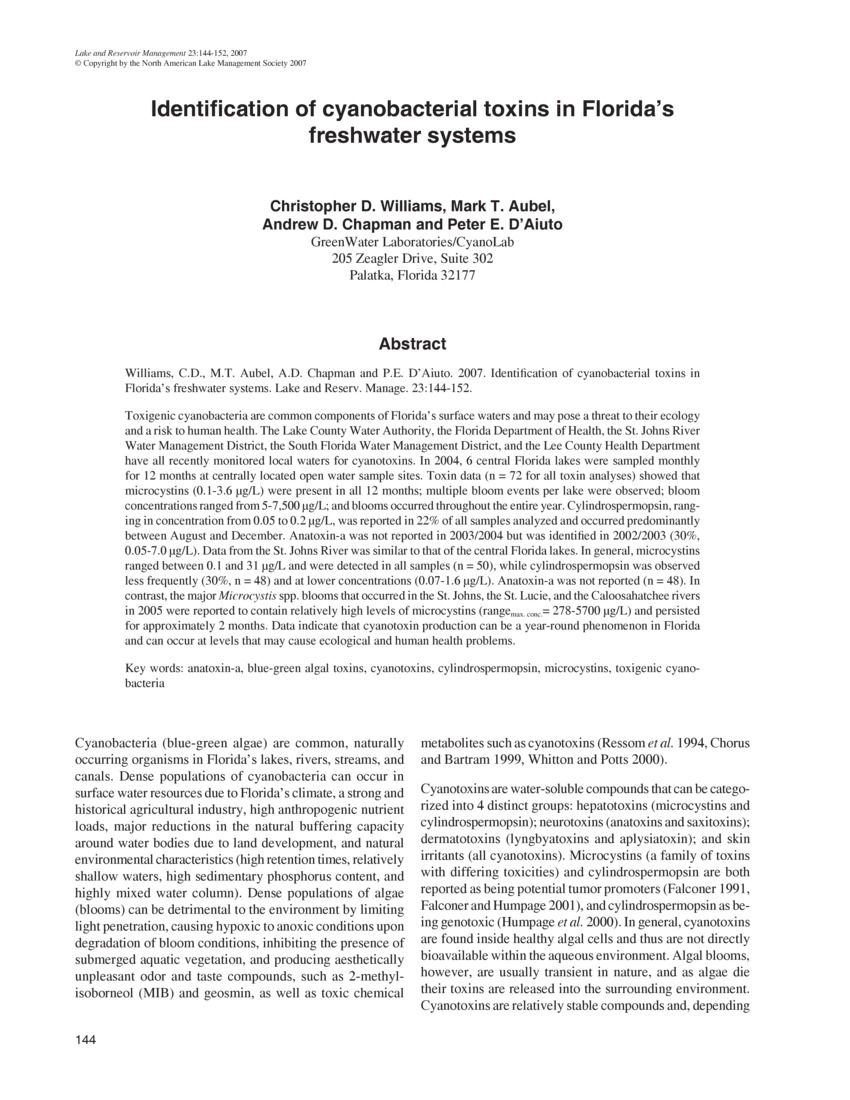