Movements, Habitat Use, and Survival of the Threatened Eastern Indigo Snake (Drymarchon couperi) in Georgia

Drymarchon couperi (Eastern Indigo Snake), a threatened species of the southeastern Coastal Plain of the United States, has experienced population declines because of extensive habitat loss, fragmentation, and degradation across its range caused primarily by development, fire exclusion, some forestry practices, and agriculture. I conducted a radiotelemetry study on D. couperi from December 2002 to December 2004 on Fort Stewart Military Reservation and adjacent private lands to determine movements, habitat use, survival, and shelter use of the species in Georgia. Annual home ranges were large (35-1538 ha, n = 27) and positively related to increases in body size and sex (male), and negatively associated with use of habitats managed for wildlife compared to areas used primarily for commercial timber production. Habitat use analyses suggested positive selection for wetland, evergreen forest, pine-hardwood forest, and field habitats, with avoidance of urban areas and deciduous forests. Annual survival in 2003 was 0.890 (CI = 0.736-0.972, n = 25) and 0.723 (CI = 0.523-0.862; n = 27) in 2004. Survival analysis suggested that body size, standardized by sex, was the best predictor of adult D. couperi survival, with lower survival probability for larger individuals within each sex. Microhabitat use was most influenced seasonally compared to sex, site, or body size. Underground shelter type and duration of use were influenced by season and habitat type. During winter, >90% of underground locations were at tortoise burrows; however, reliance on these burrows was less pronounced in spring for males and in summer for males and females, when snakes used a wider diversity of shelters. Because of the large amount of land and wide variety of habitats used by the species, alteration of management and conservation goals to include D. couperi, as an umbrella species, would benefit more species and assist in larger-scale biodiversity conservation. In Georgia, conservation of large tracts of relatively undisturbed land is potentially the most important factor for maintaining D. couperi; however, quality of the habitats, including a matrix of uplands and adjacent wetlands, in addition to availability of appropriate shelters are also necessary for D. couperi populations. 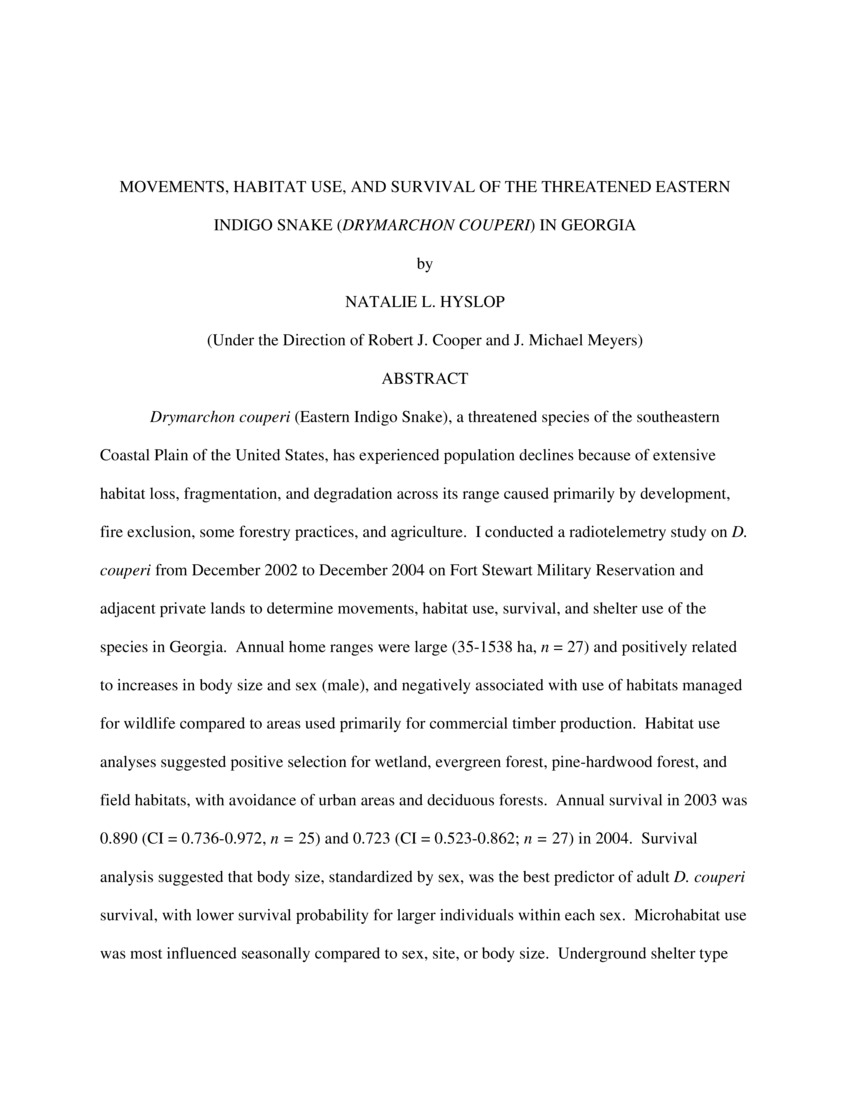